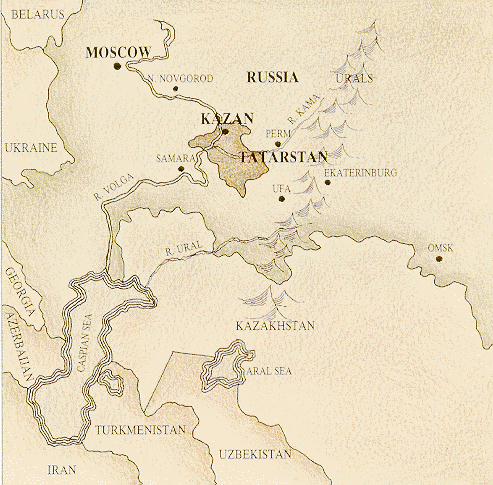 Russian
INFORMATION ABOUT THE CITY OF KAZAN

Kazan is the capital of the Republic of Tatarstan, one of the largest economic, scientific, cultural centres of our country and an ancient city. It is situated on the great Volga river. At the beginning of the third millennium the city is going to celebrate 1000 years of its foundation.
"Kazan" in Tatar means "cauldron". The place where the city is situated reminds of a hollow, a cauldron. According to a popular legend, one of the khans dropped a cauldron here in the stream of Kazanka river and people began to call the area "the place of a cauldron".
By the end of the first millenium AD the place where modern Kazan is situated was the northern frontier of the state of Bolgars. In the 15th century Kazan became the capital of the principality, and in the 15th century - the capital of the Kazan Khanate. In October 1552 Ivan the Terrible captured Kazan and the city was nearly razed to the ground and burnt. In 1556  construction of the white-stone Kazan Kremlin started. Gradually the city is restored and begins to look like many other Russian towns. Kazan, being a military fortress, turns to a huge trade, industrial and administrative centre of the region. In 1708 Kazan becomes the centre of the vast Kazan province that initially occupied nearly half of the European part of Russia. Its advantageous economic position helped the city to grow. By the middle of the 19th century Kazan is finally formed as a city-building entity. Kazan becomes a centre of the military, educational, mail districts, of the  judicial circuit and the circuit of water ways transportation. The city was destroyed and burnt several times, built anew and restored. On May 27th, 1920 the city became the capital of the Tatar Autonomous Soviet Socialist Republic. Today Kazan is the capital of the Republic of Tatarstan.
The city has a state award - the Lenin Order.
Kazan is classified as class "A" of the historical and cultural value (the same as Moscow and Saint-Petersburg). The border of the historical centre of the city nearly coincides with the city line of Kazan of the year 1890 with the area of 1700 hectares that makes around six per cent of the territory.
The city is bound to the names of G. R. Derzhavin,  A. S. Pushkin, L. N. Tolstoy, G. Tukay, S. Mardzhani,   K. Nasyri, N. I. Lobachevsky, K. Fuks, N. M.Butlerov,   F. I. Shalyapin, V. I. Katchalov, G. Iskhaki,           M. Maksudi, M. Dzhalil and many others.
Today the population of the city is 1 million 200 thousand people. 40,7 per cent are young people under 30 years of age. Representatives of more than 101 nationalities live in Kazan, 22 national cultural centres are organised.
Kazan is split into 7 administrative units where more than 140 huge industrial enterprises are situated (вЂњKazan Organic SynthesisвЂќ joint stock company, вЂњKazan helicopter plantвЂќ joint stock company , Kazan aircraft production merger named after S. P. Gorbunov, вЂњKazan mechanical optics plantвЂќ joint stock company, вЂњKazan medical instruments plantвЂќ joint stock company, В«TeplokontrolВ» industrial merger etc.)and more than 70 thousand medium and smaller enterprises. Kazan is a port of five seas, an important airways, railroads and motorways junction. Tramways, trolley-bus and bus routes run for 835 km. The metro is under construction.
Beginning from 1996 В«The program of elimination of dilapidated apartment houses and reconstruction of dilapidated apartment blocksВ» adopted by the President of the Republic of Tatarstan M. S. Shaimiev is being successfully implemented. The program planned until 2004, undertakes gradual, step by step reconstruction of apartment houses of the capital, moving of 32 thousand people to new flats. For this purpose within three years 90 houses have been built with the total area of 571 200 square meters.
According to the level of gasification  Kazan is among the first ten cities of Russia.
There are 7 theatres, 8 cinemas, 30 higher educational institutions, the Academy of Science of the Republic of Tatarstan, Kazan Centre of the Academy of Science of the Russian Federation, a network of special schools, the National Library. In 1804 Kazan state university was founded. It became the third one after Moscow and Saint-Petersburg universities.
Until now Kazan has preserved the position of an important cultural centre of the Volga region. Every year the Chaliapin International Opera Festival and Nureyev Ballet Classics Festival take place in the city. Today they gain great popularity around the world.
The city provides best conditions for developing different sports and tourism. This gives opportunities to enter the Super League and the High League for such teams as В«Ak BarsВ» (ice hockey), that became the Champion of Russia in 1998, В«Uniks-LokomotivВ» (men basketball), В«KAI-TacitВ» (hand ball), В«RaketaВ» (ball hockey), В«PrivolzhaninВ» (mini-football) etc. В«RubinВ» football team entered the First League.
On May 8th, 1999 Kazan yachtsmen came back from a round-the-world adventure that started on board the В«North StarВ» yacht from the pier of Kazan river port on August 30th, 1997.
Kazan is a city of many confessions where representatives of various religions live friendly. There are 23 mosques, 16 orthodox churches, a Lutheran one and a catholic one, Judaic synagogue, prayer houses of the Seventh day Adventists, bakhai, Krishna.
Kazan is a city of a very advantageous geographic position. For long itвЂ™s been a trade intermediary between the East and the West and now the city plays a prominent role in political, economic and international relations.
Kazan is a unity of the great historical past, glorious present and even more splendid future.